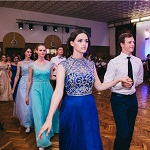 Graduation is both a happy and sad time. It is a time to reflect upon the experiences, meet up with and say goodbye to old friends, time of anticipation and excitement.

On June 27, Vernadsky CFU’s alumni, faculty and staff gathered at the university’s Event Hall for an evening of celebration, elegance, music, and dance. This year’s Rector’s Ball – held for the fourth time at the university – was devoted to the 100th anniversary of the establishment of the main higher education institution in Crimea.

The ball was attended by 180 outstanding graduating students, including graduands having the highest grades, sports awards winners, social activists, leaders of youth organisations and budding scientists, who received their degrees and were also presented with certificates and letters of appreciation in recognition of their exceptional achievements.

The event, organised collaboratively by the university’s Department of Social and Youth Policy and the Centre for Creative Initiatives and Cultural Events of Taurida Academy, included a wide range of music, dance and theatre performances by graduates and the Centre’s staff. Speeches were made by the university’s vice-rectors and heads of academic units. The guests and hosts were treated to several enjoyable surprises, including live classical music performed by the Crimean State Philharmonia Orchestra and a marriage proposal to a Psychology graduand, that made a great day in her life even greater.