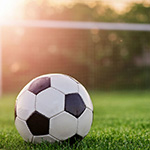 Until June 1 all the matches of the national student football league are stopped due to the coronavirus pandemic. But it doesn’t prevent the combined team of the Crimean Federal University to continue trainings. How football players under conditions of self-isolation are preparing for matches and what awaits the national student league in the future further in the video.

As of today the football team of the Crimean Federal University has achieved for itself the previously unprecedented results. The guys are the first in the national student soccer league. This place in the tournament table imposes certain obligations: nothing must prevent a victory, especially the compulsory absence of games. “But for this already today it is necessary not just to train, but to work even harder on ourselves and not to relax”, the Head of the CFU football team Andrei Gorbachev emphasizes.

Members of the combined football team of the Crimean Federal University have heard the coaching staff, and today are already training choosing the necessary course of exercises for themselves.

And despite the fact that due to the epidemic football all over the planet has stopped, at the central university of Crimea they believe that this phenomenon is temporary. And already closer to the end of May on green fields again there will be a hard, uncompromising, but honest fight, and not one beautiful goal.