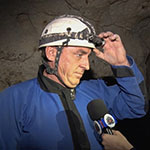 A new cave, described as unique and unparalleled in Crimea, has been discovered near the rural town of Zuya during the construction of Tavrida motorway that will stretch from Sevastopol in the west of the peninsula to Kerch in the east. A group of scientists and researchers from Vernadsky CFU is involved in the exploration and survey of the cave.

According to Dmitry Startsev, from Vernadsky CFU’s Zoological Museum, the cavern, which is over 1,000 metres long, is the largest in the foothills of the Crimean Mountains and contains plenty of well-preserved animal remains dating back more than half-a-million years.

Gennady Samokhin, the Head of the Russian Union of Speleologists, said work on the motorway construction temporarily stopped to allow a joint team of scientists from Vernadsky CFU and the Russian Academy of Sciences to investigate the site and study the contents of the cave, which include the bones and teeth belonging to ancient animals, such as a rhino, elephantlike mastodon, southern mammoth, small antelopes, hyenas and various ungulates.

Currently, the experts are searching for the mouth of the cave where they hope to find evidence of ancient human presence.