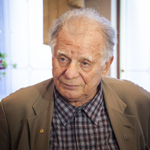 Zhores Alferov noted that the future of Crimea depends largely on the development of alternative energy sources. According to Alferov, the development of solar energy constitutes one of the priority lines of his and his fellow scientists’ cooperation with the recently established Physics and Technology Institute of V.I. Vernadsky Crimean Federal University.