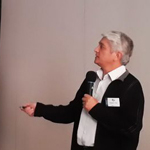 The XIXth European Congress of Lepidopterology was held in Dresden, Germany from 27 September to 2 October, 2015.

258 scientists from all over the world participated in the Congress this year. The theme of the XIXth Congress focused on the use of biological chemistry to solve problems in general and evolutionary biology.

Professor Konstantin Efetov, Head of the Chair of Biological Chemistry at S.I. Georgievsky Medical Academy of V.I. Vernadsky CFU, took part in the work of the Congress and made two presentations on researches that the Chair is currently involved in. His presentations covering the subject of solving problems in evolutionary biology and biosystematics led to an extensive discussion. This year, field observations were undertaken in the Crimea, Austria, Italy, Iran, USA, Great Britain, Tajikistan, and Laos. In the course of the Congress, it has been agreed with fellow scientists from Switzerland and a number of other countries to undertake field observations in Turkey, Sri Lanka, and some South American countries. Professor Konstantin Efetov, Head of the Chair of Biological Chemistry at S.I. Georgievsky Medical Academy, delivers a lecture on a sex attractant composition