Main > News > Online study mode of anatomy – it is possible 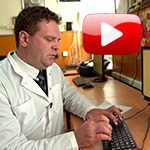 Since the first days of the online study mode many people have been interested in the question how practical classes will be held for medical students. The access to corpse material and to an interactive anatomical table is now not available due to definite reasons, and it is not very effective to study anatomy only from “flat” pictures in the textbook. The Associate Professor of the Department of Normal Anatomy of the Medical S.I. Georgievsky Academy Vladimir Ovcharenko has found a way out of the situation with the help of his hobby – programming. Based on the API (application programming interface) of the BioDigital platform, he has created a system for teaching and testing on anatomy using a 3D model. 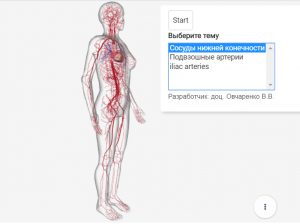 “I have fully write an editor which saves these questions and answers to our database, and the process of testing: selection of questions, their randomization, their appearance on the screen, sending the result to the server for saving, preparation of reports, which will then appear on request, etc. Authorization from “VKontakte” and synchronization with contacts – all this has been implemented by us, Vladimir Ovcharenko said.

Vladimir Victorovich wrote his first program in 1995 on the ZX Spectrum computer. Since then, he has constantly been improving his knowledge and today he is programming in seven languages.

The 3d anatomy program allows not only to study the structure of the human body online, but also to check the students’ level of knowledge. The questions are written in two languages, which gives an opportunity to work with both Russian-speaking and English-speaking students. 2 minutes is given for each answer – this time is enough for users of both computers and mobile devices. Each student gets his set of questions, and it will be impossible just to learn answers or cheat.

“The answer is an action where you need to show the artery correctly. You can’t say it’s the third on the right. It is necessary to understand the material, it is necessary to scale correctly, to turn the model in which this artery is visible, or any other formation, to find the right angle, the scale to avoid mistake, to choose – and it will be the right answer. It is impossible to prompt how to do this online,”- says the author of the program.

Such a strict approach is not liked by unscrupulous students, but is liked very much by those who treat the study responsibly and want the lectures to appreciate it.

“In my opinion, the cardiovascular system that we are currently studying cannot fully be studied by textbooks or even by post-mortem. While 3D models allow you to fully see and understand the material being studied. Despite the fact that at the moment such an online system has no parallel, our academy is doing well,”- believes the student of the first year of the Medical Academy Dmitry Govorukha.

“With the new 3d testing and atlas that the Department of Anatomy has created for us, it has become much easier. It is an accessible and convenient format. We can trace, for example, the course of an artery without additional efforts, which is very important in the study of anatomy, “- added the student of the 1 year of the Medical Academy of the CFU Edie Alyustayeva.

Unlike the interactive anatomical table, where you can test only one student, Vladimir Ovcharenko’s program allows you to test the knowledge of all students studying anatomy at the establishment of higher education. The possibilities of 3D testing are already being used by many lecturers of the Medical Academy, and in the future this program will certainly interest other medical establishment of higher education.