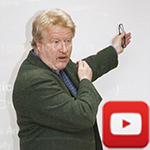 The historic uniqueness of Crimea is known far beyond the peninsula. The rural hinterland of ancient Chersonesos on the Tarkhankut Peninsula in north-west Crimea still attracts the attention of researchers who study Greek settlements in late Classical and early Hellenistic times, 4th-3rd centuries B.C.

According to Jens Andresen, he and his colleagues have learned things that have changed their view of what life was like in the Chersonesean countryside, which the Greeks called chora, as well as throughout the west of Crimea. He also expressed his hopes that, despite the difficult political situation in the region, the researchers from the two universities would continue to work together and proceed with the excavations.

Professor Igor Khrapunov from the Department of Ancient and Medieval History at the Taurida Academy of Vernadsky CFU supported the views of his colleague from Denmark and noted that science cannot develop within a single country or isolated community. He added that, despite the challenging circumstances, the researchers and scientists from Crimea are keeping contacts with their colleagues from other countries, including European countries, and trying to develop opportunities for joint collaboration.

The Tauric Chersonese is an ancient Greek colony on the Crimean peninsula, which was founded by settlers at the end of the 6th century BC in order to supply their homeland, Greece, with grain and other strategic resources. The farmland in the Greek colonies was vital to the survival of the Greek city-states. Aarhus University archaeologists carried out excavations to explore the development of the rural area from its peak until its decline.

One of the conclusions of the scientists so far is that in the early 3rd century BC during a period of crisis a large proportion of the rural population was killed following a military invasion. The skeletons of these people can be found just 40 cm beneath the surface of the soil in a number of housing structures which the Aarhus archaeologists have excavated.

“The city’s rural territory, particularly on the Herakleian and Tarkhankut peninsulas, is incredibly well preserved. The houses of the rural population dating back to about 300 BC lie dotted around the untouched landscape in the form of ruins that are still visible,” Vladimir Stolba explained.

The ancient city of Tauric Chersonese and its Chora have been inscribed to UNESCO’s list of world heritage sites – as an “outstanding example of democratic land organization linked to an ancient polis, reflecting the city’s social organization”.

“We’ve had several teams of students from Denmark and the host country on our expeditions. It’s been a great experience and very fruitful collaboration. We are in a lucky and, in a sense, unique situation to work on short-lived rural sites which have never been re-inhabited since their destruction in the early 3rd century BC.”

“The picture that emerges from the excavations is a snapshot of daily activities of the ancient peasantry, of its life and dramatic death. We’ve found answers to many of our research questions: for instance, who cultivated the Greek grain fields, how densely the area was settled and how it was organised, and how the ancient population adapted to changes in cultural and natural environment.”

“The answers have given rise to new questions that we want to explore next. The world heritage status will hopefully help to preserve this unique area, enabling us to continue our work,” concludes Vladimir Stolba.