Main > News > Meeting with Janusz Korwin-Mikke, Member of the European Parliament for Poland 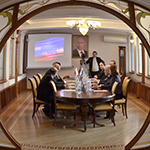 At the invitation of the Head of the Republic of Crimea Sergey Aksyonov, Janusz Korwin-Mikke, Member of the European Parliament for Poland, paid an official visit to the Crimean peninsula.

As part of his visit to Crimea, Janusz Korwin-Mikke visited V.I. Vernadsky Crimean Federal University where he met with the University’s senior officials, including Rector Sergey Donich, to learn about the structure of and near-term development prospects for Crimea’s principal tertiary education institution, which has become the tenth federal university in the Russian Federation.

In the course of the meeting, the sides discussed a number of political, economic, and social issues. Crimean Federal University is actively implementing the Development Programme aimed at improving education quality in Crimea and promoting research and expert activities in the region.

Janusz Korwin-Mikke also gave a lecture to the students of the Crimean Federal University in which he set out his vision for the future of the European Union.