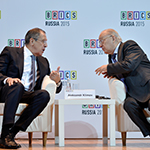 The BRICS Global University Summit was held in Moscow. Professor Victor Reutov, Deputy Director for Research of the Institute of Economics and Management, represented Crimean Federal University at this summit.

More than 400 representatives of leading universities of BRICS member countries, international organizations and research centres took part in the summit. Russian Minister of Foreign Affairs and Deputy Minister of Education as well as the heads of other ministries and departments responsible for the areas covered by cooperation within the BRICS attended and addressed the summit. Ministers of Science of the BRICS member countries participated in a panel discussion held during the special session of the summit devoted to academic research.

Among the issues discussed at the BRICS Global University Summit were cooperation in education and research and items of the general agenda of Russia’s presidency in BRICS. The programme of the summit also included sessions and roundtables that addressed issues of academic mobility, educational migration, university rankings, and university consortia. Special emphasis was given to accessibility of education and to the related question of distance education. Particular attention was paid to the matters pertaining to the creation and functioning of the BRICS Network University.

At the meetings held during the summit, representatives of Dalian University of Technology (DUT) and the University of Johannesburg (UJ) expressed their keen interest in establishing cooperation with Crimean Federal University.

DUT is one of the top national universities in China, a highly focused science and engineering research and education institution. The university offers the country’s top-ranked engineering programs, producing the best engineers in China.

UJ is one of the largest universities in South Africa, with nine faculties having more than 90 departments and an enrollment of approximately 48,000 students, spreading over four different campuses. UJ boasts world-class, internationally recognised academic programmes in both undergraduate and postgraduate education.