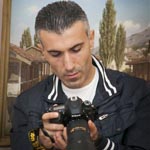 How is Crimea portrayed in foreign media these days? What’s happening in Crimea after its reunification with Russia? What is the essence of a journalist’s mission? What are the ways for the media to stay independent and objective in a challenging economic situation?

These and many other questions were discussed during a meeting between students of the Faculty of Slavic Philology and Journalism of CFU and foreign reporters, who arrived in Crimea to take part in the Second International Assembly of Young Journalists.

According to Ashot Dzhazoyan, Executive Secretary of the Russian Journalists’ Union and Chairman of Commonwealth of Journalists’ Media-Congress, the main purpose of the foreign journalists’ visit was to hold meetings with the people of Crimea and get an understanding of what is happening in today’s Crimea.

About 70 representatives of print and electronic media from Greece, Serbia, Bosnia and Herzegovina, Bulgaria, Hungary, and other countries came to Crimea to participate in the Second International Assembly of Young Journalists.

In the course of the event, the participants also visited a number of historical and cultural sites and met with the representatives of various cultural communities in Crimea.